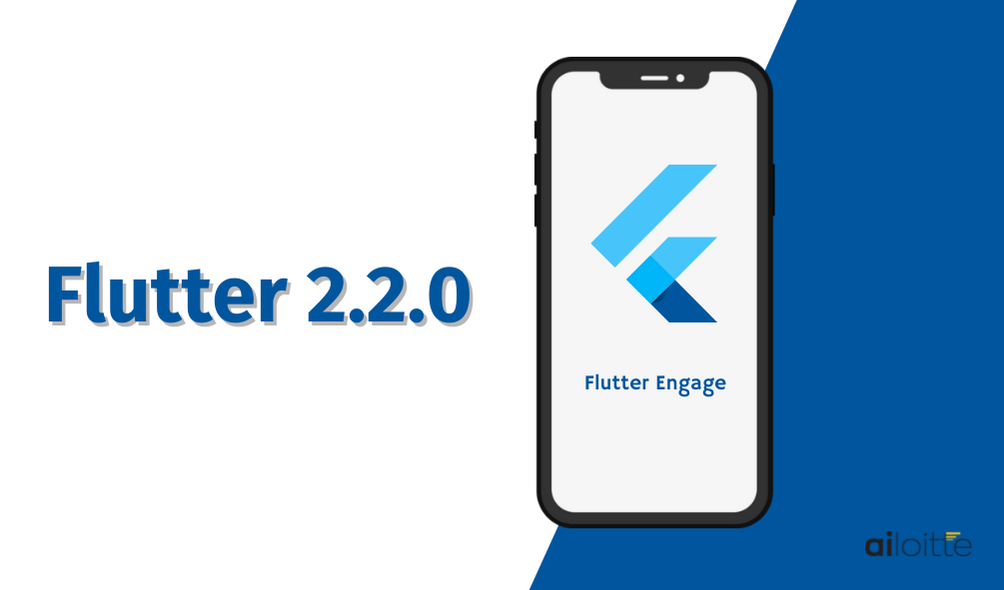 This blog post covers the important changes that have come in flutter 2.2.0 announced by Google.

Flutter is starting to grow up and be in demand! Flutter 2.2.0 was announced at Google I/O 2021. There are almost 1,000 PRs in flutter/flutter merged and other projects.

Flutter Web, iOS enhancements, a new Dart release, new packages, tool improvements, and so much more are all included in this version.

Following the successful launch of Flutter 2, Google has indicated that it intends to continue developing the framework, which is one of its numerous initiatives. Perhaps this is why people who were previously concerned about mobile cross-platform are now at ease since Google is leaving no stone unturned in its efforts to build this framework.

Here are the changes released in flutter 2.2.0, which are important for the Flutter developers’ future success.

Google is collaborating with a community to create a package that would allow Flutter app developers to use Dart’s Cloud functions, which is an excellent method to support serverless solutions. Dart on the backend has been around for quite some time, as seen by projects like Aqueduct and Jaguar.

Furthermore, having Flutter app developers working on both the backend and the frontend is beneficial. It is much simpler to make any project a success when everyone has comparable thoughts and understanding about the project and it is written in a common language.

Flutter app developers will benefit from a better ecosystem around this framework now that Flutter 2.2.0 includes Dart 2.13, which enables Array and packed structs in FFI and type aliases. Apart from the revised Adobe XD to Flutter Plugin and Alpha of Flutter Support for UWP applications, programmers will appreciate the Docker image and GitHub activity for installing DartSDK. Type aliases allow you to shorten lengthy names and rename classes without breaking anything, making it easier for users to follow the development process.

Real also : What is Flutter? Pros and Cons of flutter app development

What distinguishes Flutter 2.2.0 and makes it more adaptable for us all is that it pays attention to its community by organizing social media initiatives. This structure has always included the community as an essential component. It enables developers to control the basic widgets and add well-known packages to the Flutter favorites list.

Furthermore, it is adaptable since most Software developers find it ideal for creating their product owing to its friendly community environment.

That is exactly what Google did with Flutter 2.2.0 — it acknowledged the value of its community. Even Remi Roussel’s provider package, which he built, is now available to be debugged in DevTools.

3. Text Handling Has Been Improved

Flutter release supports areas that were previously essential on mobile form-factors as well as desktop form-factors. Text handling is one such area where things will get more interesting now that Flutter 2.2.0 has been announced.

Programmers will have the opportunity to restructure how text input is handled, including canceling keystrokes as they bubble through the widget.

This feature of Flutter 2.2.0 allows Flutter to support spacebar and arrow keys without interfering with scroll events. End customers will be able to enjoy more engaging and interactive apps as a result of this collaboration. Additionally, developers may tab between the button in the Flutter app and the TextField.

Previously, most iOS users complained that Flutter was completely worthless to them. A ray of hope has flashed for iOS users with the launch of Flutter 2.2.0. From the perspective of a developer, it may appear to be a minor issue, but it is a major problem for users. They would eventually delete the app and never return it.

Google has introduced the concept of caching shaders so that customers do not uninstall your app due to issues such as poor UX, non-performant animations, and lengthy loading indications.

Flutter 2.2.0 is more adaptable since it is ready to develop exceptional experiences. Flutter assists developers in creating excellent experiences by eliminating the traditional constraints.

Google wants to make Flutter apps perform as best as possible, thus it includes improved scrollbar behavior in this version. The scroll bar does not appear by default on iOS and Android, although it appears on the desktop. This edition automatically inserts a scrollbar as needed to ensure proper scrolling. As a result, when developing a flutter app, developers will no longer have to worry about scrolling.

Flutter is a newly developing platform in the digital industry that is creating a revolution in the expanding world of business. It has been the preferred option of many entrepreneurs due to its extensive features.

Flutter 2.2.0 is a greatly better and expanded version of what developers have been utilizing for Flutter app development.

Did you know that there are over 200000 Flutter applications in the Google Play Store alone? As a result, we anticipate that Flutter will be more adaptable and stable following the release of Flutter 2.2.0, and considerably more reliable for app development than it has ever been.

Do you need assistance in establishing a dedicated team of Flutter developers in India? Get in touch with our business head right now for a free consultation.