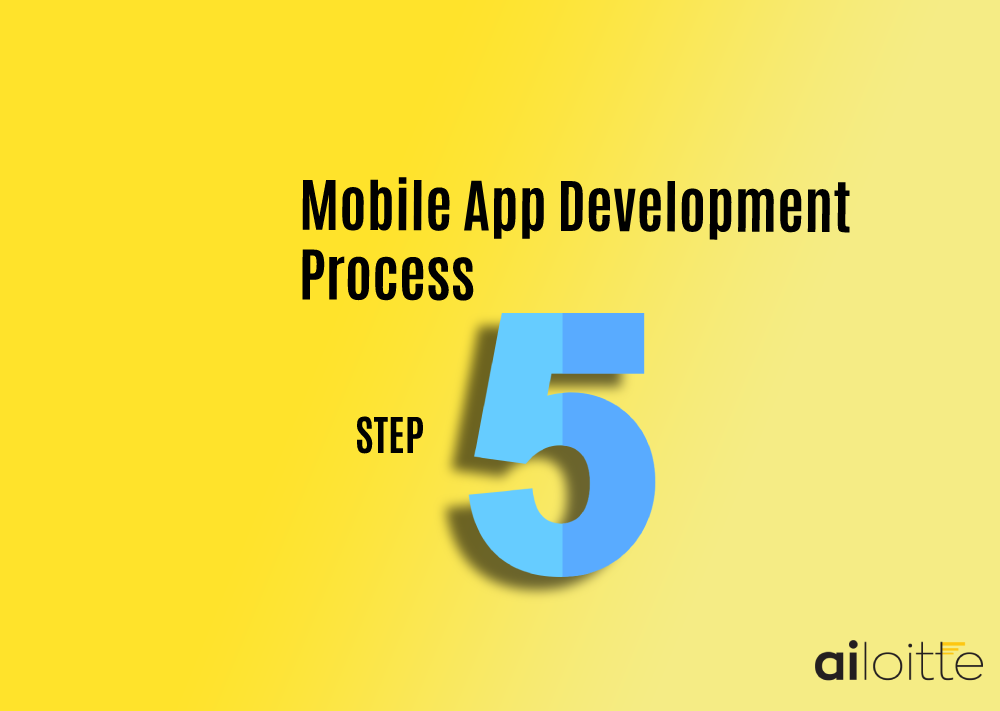 Every phase of the mobile and web app development process is covered in the article series Mobile App Development Process – A Step by step guide. We discussed preliminaries, choosing the right partner, strategic planning, analysis, implementation, and UI/UX app designs in prior posts. Now is the time to concentrate on the development of the application.

Development is the longest step as it involves writing code and figuring out the architecture. Fortunately, it is also one of the most enjoyable processes because it allows you to test your application for the first time.

Following the creation of app designs, mobile app developers get to work putting everything into motion. The project manager assigns responsibilities to the developers, and a step-by-step strategy for mobile app development is created to meet the deadlines.

Development can be carried out in a variety of ways:

Native: In this process, a different application is created for each mobile platform. This option is the most expensive, but it is the most dependable: you will have complete server support, and the interface will run swiftly and appear as natural as possible.

Cross-Platform: In the case of cross-platform, developers use universal code for all the platforms. You don’t need to separate code for different platforms such as iOS and Android or other platforms. Hence, it is considered the best option in terms of price and quality.

The following are three crucial features of app development:

App Development can be divided into three major categories:

The backend development is required from the server’s perspective. Data is stored, secured, and processed via mobile app backends. Backend refers to the activities that take place behind the scenes when a user interacts with your mobile application.

It includes all the processes involved in creating an HTML page that the web browsers can understand. Another important part of Back-end development includes ensuring strong data security.

The purpose of developing a backend for your mobile device is to send data to the server for processing. On the backend, things like signups, logins, messaging, storing data in the cloud, and responding to user requests take place.

The back-end includes all the database and server-side engineering. This process requires building or integrating the tools to manage the app’s content and other functional requirements.

Calculator, camera, notes, compass, voice recorder, and other applications do not require backend development. They work without a network connection from a remote server on the mobile app.

Apps like Amazon, Netflix, and Uber, on the other hand, cannot function without a connected backend.

API expands to the Application Programming Interface, which is used for the integration needs. It is a method of communication between the app and a Back-end server.

The interface is something where software components can interact. However, the API allows the application to interact with the external service by using a simple set of commands.

The majority of mobile API development is done with RestAPI, which is also one of the most simple options for anyone developing mobile apps. It allows users to connect and interact with a remote cloud data server fast. Making requests across the network, on the other hand, might cause serious issues if done incorrectly.

API acts like building blocks and allows developers to build apps much faster. Also, it helps the developers to spend less time creating proper functionality in the app.

Hence, to make the application and database communicate with each other, the API is considered.

Should you purchase APIs or create your own?

There are two methods for integrating APIs into your mobile app. You can either create it yourself or purchase it from a third-party API provider.

Purchasing and integrating a ready API is the simplest since it saves time and money by eliminating the requirement for a developer to comprehend and implement API integration. Building your API, on the other hand, gives you a lot more flexibility and allows you to include or exclude functionality as per your requirements.

It’s simple to create an API. A concise API process documentation can assist you in understanding the API’s history as well as its current state. This simplifies future updates. Another advantage of documenting your API development process is that it makes your API accessible to others. Hence, you’ll need solid documentation to aid you with the code if you want other developers to use your API.

It is critical to maintaining security precautions whether you utilize a pre-built API or create your own. For developers, it is always a crucial component. Before using web-based APIs, developers must first have access to control mechanisms, privacy controls, and secret keys.

The front end of your mobile app is what your users will see. It includes a mixed bag of technologies. The front-end process includes building a client application that installs on the user’s phone.

There are typically two types of front-end development:

There are various developer languages and frameworks that can help your front developer’s efforts, whether they need to design a native front end or a hybrid front end. Keep in mind that the front end comprises everything your consumers view, from the app’s initial loading screen to all of the menus and settings.

The front-end developers must ensure the application is accessible to all the users and remains responsive in all views- mobile, desktop, and web.

We hope this article helped you with the detailed and described steps of the development process. The App development stage is considered a crucial stage that undergoes all the development technologies involved in the application.

Hence, your final app’s success is determined by how this development process is managed.

You can also visit Stage 6 – Testing to learn about the many forms of testing that are used during the app development process.

PoC vs Prototype vs MVP: Benefits, Differences, and Use Cases

How to Create a Marketplace Website in 2022: Development cost, business model & more

What is a Proof of Concept (POC) in Software Development?

How Much Does It Cost to Create a Crypto Wallet App on BlockChain?

PoC vs Prototype vs MVP: Benefits, Differences, and Use Cases

How to Create a Marketplace Website in 2022: Development cost, business model & more

What is a Proof of Concept (POC) in Software Development?

How Much Does It Cost to Create a Crypto Wallet App on BlockChain?