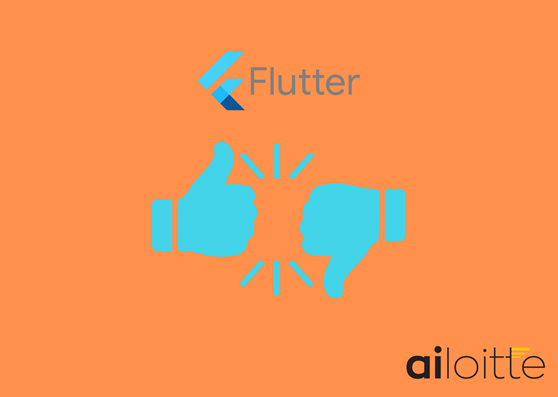 The cross-platform applications are becoming tremendously popular in iOS as well as Android systems for app owners. Hence, a lot of supporting technologies have emerged in the market to offer better cross-platform mobile applications.

One of the latest technologies getting recognised by many leading companies is Flutter. This popular free blogging platform on the Internet, Flutter, also happens to be most flexible and useful.

Are you an app owner, product owner or developer who wants to build a mobile app and is looking for a suitable framework? Flutter can be worth a shot! So what are the pros and cons of Flutter, and can it live up to its claims of being an efficient personal website builder?

We shall discuss this and some other web building issues in this article.

Google started working on Flutter five years ago in 2015, but this technology was in the beta stage until it was officially launched in late 2018. Google launched Flutter 1.0, the stable version of Flutter in December 2018

In 2019, Google dedicated a lot of attention to Flutter and launched a preview version of Flutter for web development. It further released Flutter 1.12 in the market with many improvements such as API, widgets, tools. web support, better SDK, iOS visuals and dark mode, etc

2019, Google released Dart 2.3 SDK with support for UI-as-code features. This was the most stable release with new language features that improved coding experience for user interfaces.

Since then, Flutter has grown in popularity and capabilities like nothing before. Flutter has become a hot topic in the development industry. Several big companies have developed their app in Flutter such as Birch Finance, Hookle, Alibaba, Coach Yourself and many more.

If you are looking forward to developing or upgrading your mobile app, you should be aware of Flutter’s advantages and its benefits & risks.

Also read: What’s new in flutter 2.2.0? 5 reasons why it’s fantastic include the changes released in flutter 2.2.0 that are important for the Flutter developers’ future success.

Flutter is Google’s open-source mobile SDK developer framework for iOS and Android apps development. It provides multiple widgets, tools, and features that give app owners and developers an easy framework to build a visually attractive mobile app for Android and iOS platforms.

With Flutter, you won’t be needing to develop separate apps for iOS and Android systems. All you need is to create a single codebase in Flutter for both platforms. It is a free platform based on Dart object programming language.

Flutter enables the developers to speed up the mobile app development procedure. It reduces the project’s total budget and helps the development team build an appealing app with smooth UI.

Let’s explore all the pros & cons of using Flutter for Mobile App development.

Flutter is not just another in the long list of in house web building applications but has created it’s space with its several outstanding features such as:

1. The faster and single code base

Developers well know Flutter for faster & dynamic mobile app development. The Hot Reload feature of Flutter allows the developers to make changes and updates in the code and see them take shape in real-time in the app. Hot reload makes it very comfortable for developer-designer cooperation when you need to improve your app’s look and feel with an instant check on effects. Within a few seconds, the team can experiment with new ideas by adding new features and fixing bugs.

With Flutter, developers need to write only one codebase for your apps, including the Android and iOS platform. That means you use the same codebase for multiple platforms by saving a significant amount of time and cost over the development and maintenance. And yet, if you want to differentiate your apps, you can comfortably achieve that. Flutter doesn’t depend only on the platform, but also offers its pool of widgets, designs and tools.

As mentioned before, If you are using the same app for two platforms, there will be less testing needed. Your quality assurance process can be faster and better. With only one codebase to test, the developers’ testing procedure will be reduced. As the testing work is declining, you won’t need a full-time quality assurance team for testing. But of course, if your apps have some minute differences, the team will have to get it manually and automatically tested on both platforms.

Flutter is precisely designed to offer multiple options to create your widgets or customise the existing widgets according to your requirement. You can add widgets to your web page easily using various modules, each of which is completely adaptable. Material Design widgets and Cupertino widget are few popular from many. If you don’t like the built-in devices, you can add them yourself. Adding widgets to your web page is even easier than that of using them from the built-in ones.

5. UI consistency even on older devices

Flutter has this unique feature that none of the other frameworks offers at the moment. It enables the same UI on all systems, including the older versions of Android and iOS systems. There are absolutely no additional hidden costs for supporting these older systems. It is an exceptionally well designed and structured web site builder that allows users to build and develop any complex website with a great degree of ease.

However, just like any other framework, Flutter also has a few disadvantages for app owners and developers. Let’s scan through these cons:

Flutter does have an impressive collection, but still not as good as React Native. React native is in the market from a long time which has an added advantage over the libraries and support. On the other hand, Flutter is still new in the market and does not cover every library functionality that you might need for your app. Also, Google support is not as per expectations which means that your developers would need to build the app independently without complete support from the team. However, we can see rapid growth in the Flutter support with extending libraries and guidelines.

Flutter is designed to make your life easier on the eyes by reducing the amount of time needed to focus on each screen. But while being a fluid action, there are times that you might find it difficult to work with the various elements of the flutter framework. You will find it harder to navigate the multiple drop-down menus, and when you are done navigating down the page, you still have to click the back button to open the door again.

One of the biggest disadvantages of Flutter is its iOS-specific feature. Since iPhones are based on mobile phones and mobile technology, these app design and functionality are generally at a lower standard than what is offered on the Android platform. Thus, while most Android apps are highly customisable and flexible, the iPhone apps are not. In short, if you want to access advanced features from an iPhone app, you would have to switch to using an iOS-only app.

Overall, however, the Hot Reload feature’s advantages should be enough to counterbalance the disadvantages that it has brought about.

When Flutter is the best option for mobile app development?

There exist multiple cross-platform development frameworks in the market, and a specific framework fulfils different requirements. So certain types of the app development project will find Flutter the best-suited option. Let’s explore these few special cases when it’s worth to consider Flutter as a development solution:

Flutter is well suited for developing Progressive Web Apps & Instant Apps for its availability over all platforms such as Android, iOS, web and easy deployment. This makes the apps stronger in terms of availability and greater reach with excellent performance and responsiveness.

If you want to develop an app that communicates with the IoT devices, use Flutter for your development project. Flutter offers a perfect plugin for integrating your app with Bluetooth via flutter_Bluetooth_serial. This will enable your users to control any household electrical equipment using their mobile device with your app’s help.

If you have developed certain features of your app separately for iOS and Android, you can now add them to the main Flutter app using platform channels to create a native app. In this case, you will save time as you won’t have to develop two separate native applications.

Flutter can be a reliable framework during the development of these special app scenarios.

We’d recommend Flutter to those looking for a professional-looking website. If you want something pretty easy to set up, has few requirements and doesn’t require any technical skills, then I’d say that it would be perfect for you. It’s also very cheap, which is a big plus.

To sum it up, Flutter has much more advantages for business app owners and development teams than risks associated with exploring a young technology. It offers an opportunity to develop aesthetically appealing, high-performance mobile apps fulfilling your custom needs and requirements.

Flutter is becoming serious competition for React Native grabbing high-end companies in the market. Flutter SDK is worth considering for your development project, especially when you want an app for iOS and Android system.

Flutter 1.17 is available in the market, explore your options, at least it’s worth to give it a try!

How to Make an App Like Uber Eats – A complete guide

Why Is Hiring UX Designers Important for Your Startup?

How to hire offshore developers?

How to Make an App Like Uber Eats – A complete guide

Why Is Hiring UX Designers Important for Your Startup?

How to hire offshore developers?